The Dalles is one of the oldest permanently occupied places in Oregon. An area formed by volcanoes and molded by the Columbia River. A place for pioneers and adventurers.

The Columbia River Gorge has drawn people for more than 13,000 years. Native people flourished along the Columbia River – making their clothing from cedar bark and animal skins; building homes where they comfortably survived cold winters; thriving on abundant runs of salmon and steelhead, as well as sturgeon, smelt, and eel speared and pulled form this tremendous river’s rapids and pools.

A vital source of livelihood thousands of years ago, as it is today, their strategically located Columbia River homeland became the center for northwest trade among tribal nations. Trade goods found near Wakemap Mound included pipestone from Minnesota, turquoise from the southwest, dentalium from Vancouver Island, and copper from the far north. For thousands of years, the Columbia River Gorge has been the pathway connecting the Pacific Northwest to the rest of the continent. 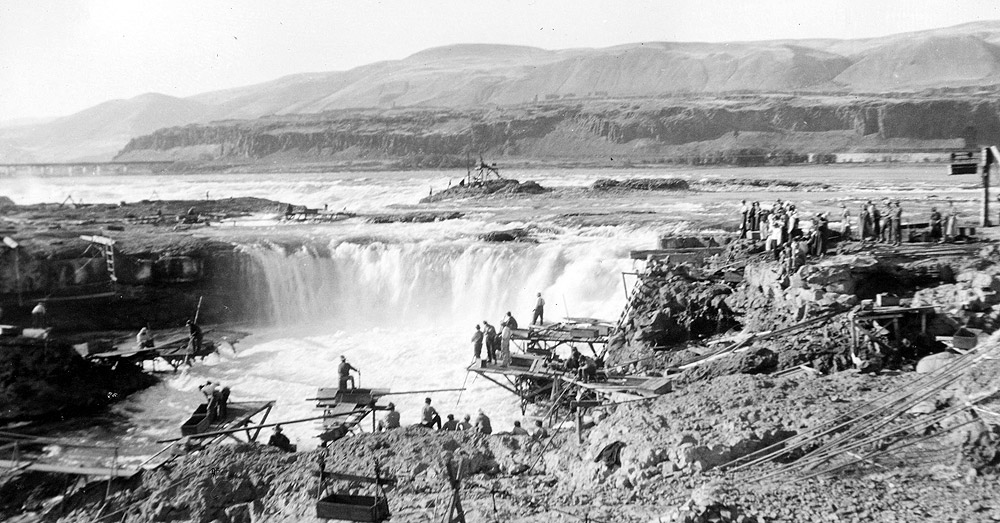 Fishing on the Columbia River | Photo from Oregon Historical Society

French Canadian “voyageurs” ventured into the Columbia Gorge area in search of beaver following the 1804-1806 expedition of Lewis and Clark. These, and the subsequent expeditions of botanist David Douglas, ornithologist John Townsend, and others into this plentiful land of fish, fur, and timber beside the “great river of the west” stirred the nation’s interest.

Then, during an 1824-36 evangelical movement, Jason Lee headed for Oregon as a missionary, followed in 1836 by the Whitmans, and the Spauldings. The immigration encouraged by the missionaries’ letters and reports caught fire in the 1840s; fanned by economic depressions and outbreaks of disease in the east, and concern over British domination of the northwest.

By 1849, 11,500 emigrants had endured the hardships of the Oregon Trail and reached The Dalles at the eastern end of the Gorge.

With the coming of these white settlers, the indigenous people – ravaged by successive epidemic diseases from the mid-1700’s through the 1850’s – were displaced, for the most part, from their traditional lands; forever changing life in the Gorge. Because the steep-cliffed Columbia River Gorge proved impassible, The Dalles became the western terminus for Oregon Trail wagon travel. From here, the early emigrants braved the dangerous Columbia River – some losing the battle with the treacherous rapids of this wild (pre-dam) waterway.
The Dalles is one of the oldest permanently occupied places in Oregon, significant to Native people for over ten millennia and to Euro-American settlers since the 1830s. The city, the largest in Wasco County, is located on a bend of the Columbia River at the east end of the Columbia River Gorge National Scenic Area. As the center of navigation on the Mid-Columbia River, The Dalles is the county seat and was known as the Gateway to the Inland Empire, a jumping-off spot for pioneers, soldiers, gold miners, and adventurers.

Below: An 1884 Birds-Eye Illustration of The Dalles, Oregon
Our vineyard is near the hill in the upper left

The natural story of the Columbia River Gorge begins with the fiery volcanoes of the Cascade Mountain Range, part of the Pacific Rim of Fire. At the Eastern end of the Gorge is an arid plateau that was largely created 14-17 million years ago by the many flows of the Columbia River Basalt Group. Together, these sequences of fluid volcanic rock form the 200,000-square-mile Columbia Plateau in eastern Washington, Oregon, and parts of western Idaho. On a clear day, two of those volcanoes, Mt. Hood and Mt. Adams, can be seen from Threemile Vineyard.

Over the millennia these volcanoes left lava and mudflows up to two miles thick. Out of 270 lava flows that spread across the region, 21 poured through the Gorge forming layers of rock up to 2,000 feet. Remnants of these flows can still be seen in the Gorge’s columnar basalt cliffs and they are an important part of what make the Threemile site special. 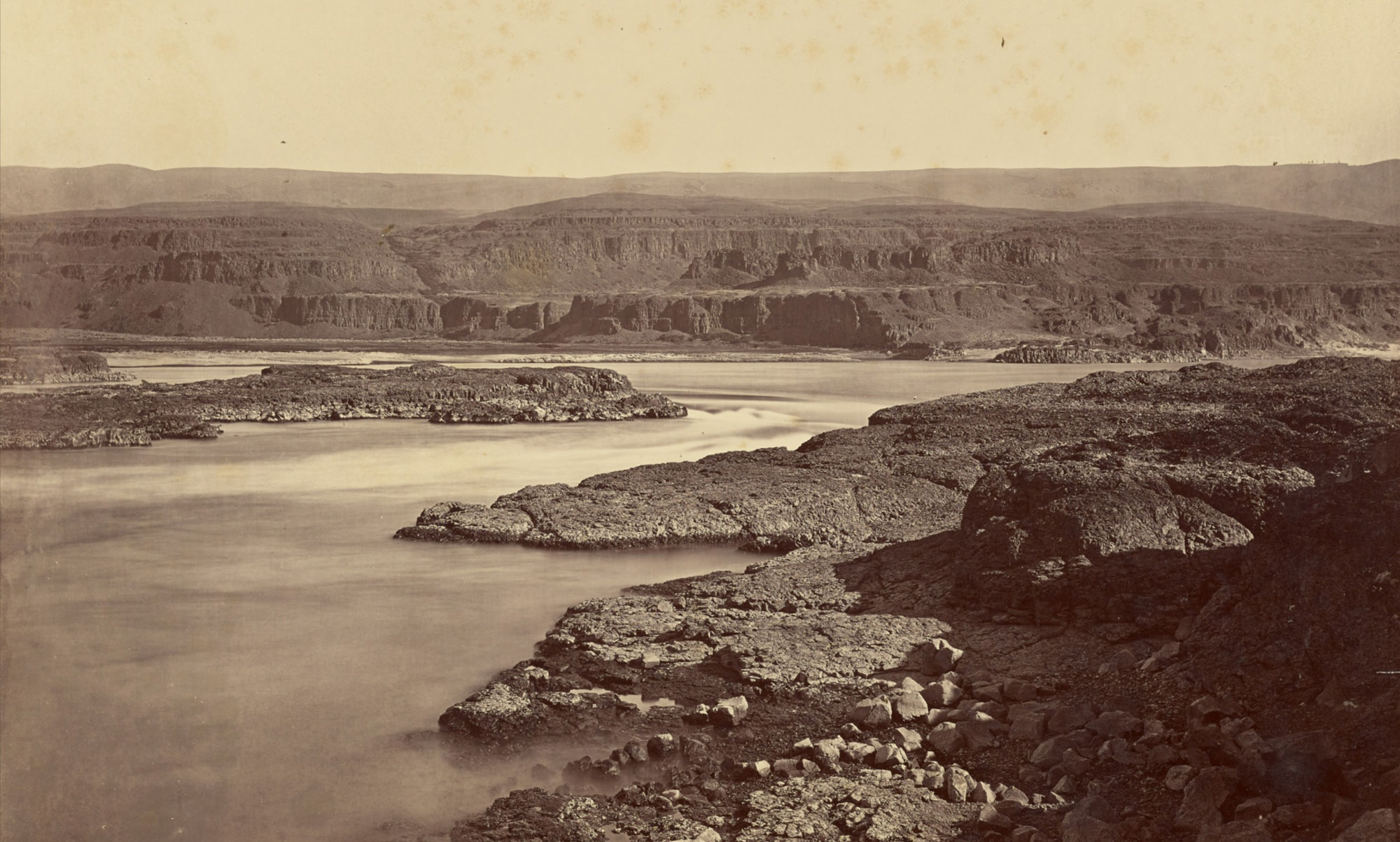 The Columbia River Gorge began forming more than 15 million years ago. It comprises over 300 separate flows, divided into 6 major formations. These flows were separated by thousands of years, and each basalt layer had time to erode and create a layer of soil and sediment. This allowed entire forests to grow and flourish before the next river of lava flooded the land. During this period the Cascades Range was forming, which slowly moved the Columbia River’s delta about 100 miles north to its current location.

At the end of the last Ice Age the Missoula Floods cut the steep, dramatic walls that exist today. These cataclysmic floods swept periodically across eastern Washington and down the Columbia River Gorge.

Known as glacial lake outburst floods they were the result of periodic sudden ruptures of a 2000 foot tall ice dam on the Clark Fork River that created Glacial Lake Missoula. Lake Missoula was a prehistoric proglacial lake in western Montana that existed periodically at the end of the last ice age between 15,000 and 13,000 years ago. The massive lake measured about 3,000 sq mi and was about half the volume of Lake Michigan. It was 4200 feet deep. After each ice dam rupture, the waters of the lake would rush down the Clark Fork and the Columbia River, flooding much of eastern Washington and the Willamette Valley in western Oregon. After the rupture, the ice would reform, creating Glacial Lake Missoula again.

The floods would scour the Gorge up to 1200 feet with violent flows 10 times that of the Amazon River. This sheared off tributary streams draining into the Columbia and created the one of the world’s densest concentration of waterfalls. These are likely the most violent floods ever documented in geologic history.

The natural elements of the Gorge adapt to its magnificent geology, creating a mosaic of ecosystems – from the wet, emerald forests of the western Gorge to pine-oak woodlands and the arid, grassy savannahs of the east.